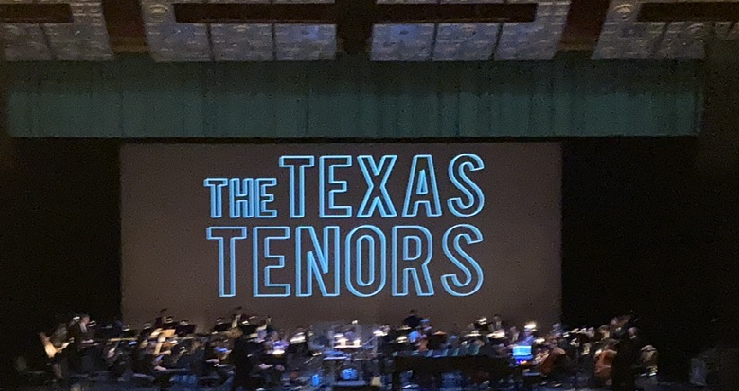 This Texas Tenors concert was completely accompanied by the Orchestra Kentucky, with Maestro Jeff Reid weaving the orchestra through the arrangements with The Three Tenors in a seamless performance. This was a completely professional performance on every level and the audience was treated to a variety of styles and sentiments checking every box that a Southern Kentucky audience craves: spirituality, patriotism, humor, love, and a bit of exoticism with some traditional Italian songs.

They waste no time or take no prisoners when it comes to creating rapport with the audience. All done with an undeniable southern charm, a wink of the eye, and smiles to break some hearts their presentation is planned yet spontaneous, positive, and shares a message of hope that we all need right now. One of the elements that works completely in their favor is that they appear as regular guys who just got together one day and enjoyed singing with each other. This “everyday guy” element plays well to an audience because it makes the audience feel as if they are one of them. Plus, they are prime examples of the “American Dream” who come from humble beginnings and make it into the big time. However, none of this is fake, it all comes from authenticity, which in today’s world is hard to find but is greatly appreciated.

All three showed mastery in their area of expertise. It is a welcomed sight to see when singers know their strengths and weaknesses, and craft their show to present the best of themselves and not go outside of their own boundaries. Each knew and played their role. They harmonized together,  supported each other, and are examples of a healthy masculine love for each other. I found them to be authentic, humble, yet charismatic,  and generously giving well deserved kudos to Maestro Reid, the Orchestra, their band, and the tech/support staff at SKYPAC.

The front man would have to be Marcus Collins, dubbed “The Contemporary Tenor”, whose blond hair and teenage look matches his silky smooth light and well executed Pop voice. His mastery of audience interaction was a joy to see. He is an excellent singer and performer on every level. The “Romantic Tenor” or Country Singer of the group JC Fisher sang his solos with a style that was country, musical, and pop but always with taste. His rendition of “Bring Him Home” from the musical Les Miserables, was both lyrical and effective. John Hagan “The Tenor” was the classical voice of the evening. He has a rich warmth and depth to his voice for a classical tenor who can spin the Italianate line as few singers I’ve heard can. His Core ‘ngrato is one of the most popular Italian songs in the repertoire and a challenge for every tenor. He performed it very well and the orchestra’s accompaniment was quite impressive.

A couple of things I’d have to share are that I am not a fan of orchestral amplification and I wonder how this concert would have worked without orchestral amplification. The problem with it is that amplification makes the orchestra sound a bit uneven and it takes away the beautiful effect of natural sounds, especially in the strings. However, I realize that doing a concert with a band and singers who are amplified probably makes this an unavoidable choice. In addition, it was a bit difficult to know when the concert was over which caused a bit of confusion in the audience, however, when the last piece was presented it was then clear to all.

This evening was a complete success and I’m sure everyone in attendance went home with much more than they had expected. An evening like this borders on a church revival service in that it serves the souls of those who have been ailing over the past year because of all the turmoil in our society today and calls on our better angels to prevail.